It had been a disappointing start to my race year. So much for my resolution of running joyfully. Just running would have been a bonus after a nasty chest infection robbed me of my running training and joy during February. I was in no fit state to run my planned 10K at Longleat or my spring ‘A’ race, Bath Half, at the beginning of March.

This made the Ringwood Rabbit Run in the heart of the New Forest my first race of 2014 though I had been running every day since returning from a week in Cornwall and starting my running streak for Lent. I had no specific aim in mind except to get out, run joyfully and keep my streak going.

The race is organised by the 1st Poulner Scout Group and it came at the end of a glorious week. After a winter battering from Atlantic storms this was a slice of sun kissed, flower bejewelled summer. We set out early so enjoyed a traffic free drive down in the early morning sunshine, allowing enough time for our usual coffee and pastry break along the way. Despite feeling like your are in deepest countryside this is an accessible race with a quick run down the M3 and A27 getting us there in plenty of time. To prevent the nearby car parks being overwhelmed there is a handy park and ride a few miles down the road at a local school just across a for, (thankfully back to normal levels), in Ibsley.

Race HQ was at the Red Shoot camping park and many patrons sitting on deck chairs in front of their caravans, motorhomes and tents looked a little bemused at the stream of runners starting to arrive and limber up. We’d registered in advance for the bargain price of £7.50 but nothing was sent out in advance. Race numbers are collected on the day and there is no chip timing just a good old fashioned clock and volunteers noting down race numbers. We’d also ordered a t-shirt which is an optional extra purchase. For £9 you get a technical t-shirt with a large rabbit printed on the front in a colour of your choosing. There’s toilets and shower provided by the campsite and massage available with a bag drop tent provided and a field kitchen serving hot drinks and the enticing smell of bacon sarnies. We did our best to stay well away from such temptation, not because we are elite athletes whose only thought before a race is propoer nutrition but because we’ve also given up meat for Lent.

There was a real family friendly buzz in the air as locally based personal trainers took us through a group warm up set to Roxanne by the Police which I last heard on hockey tour. Then you were supposed to drink for every ‘Roxanne’ and ‘Red Light’ you heard … here it was all burpees and lunges but we know where they got the idea from. Then it was being led down the lane to the start line: left for the 5K and right for the 10K. No start line as such just a gathering of eager runners entirely blocking the road from any traffic except the farmer heading in our direction on his tractor.

With the minimum of fuss we were off and stretching our legs from tarmac, to gravel and onto woodland tracks. It was all very lovely at this point. I was taking it easy, feeling slightly awful in all honestly and wondering just how scenic I should take it. What I didn’t realise until I saw the elevation profile post-race is the first half of the race is all uphill – definitely a race for a negative split. The day was already heating up and by the end of it I would have the first TAN LINES of the summer to show for my efforts. Just as I was starting to ease into things and think maybe I wouldn’t feel entirely awful all the way around we swung right and started to head up a steep incline the end of which always seemed to be just around the next corner earning itself the sobriquet ‘corkscrew hill’. We started plodding up but them something happened. I found my rhythm. For what every reason I suddenly found my racing rabbit and managed to run up the hill at quite a good pace.

Eventually the hill crested and we burst out onto open moorland. By this point the sun was blazing overhead and there was no wind making this section surprisingly hot. With a popular road to negotiate and cross and with an unexpected tempo locked into my legs this was my least favourite section of the run and I was relieved when we turned of the road and headed back into the welcome shade and breeze of a woodland track. A downhill woodland track. Oh the joy. One of the things I’m trying to practice on my runs is not to brake on descents but let myself ‘flow’ down the hill by opening my stride and letting my legs go at the fastest they can without falling over. Dory says it’s like I pin my ears back and “run like a dog”. It is a wonderful burst of pure freedom and exhilaration teetering on the edge of control. There is a water stop here but I had the bit between my teeth and a hill to careen down so I continued on my way enjoying the cool breeze with a big grin on my face.

At the bottom the track continues to descend overall with a few undulations along the way. Calculating we’d started halfway down a hill I figured there must be an upward section yet to come and so it proved with a cheeky sting in the tail. It twas a steep incline that reduced many to walking but it’s short and sharp and it was soon over the top onto the final descent. Just one final road to negotiate then a charge down the lane we started from cheers urging you on and into the muddy field and the finishing tape. A bottle of water, a medal and a single portion sized carton of cereal was our reward.

We washed the sweat from our face, changed into our new rabbit ts before queuing back to get the bus. Everywhere there was bucolic scenes of the country at play in a Spring Pastoral. There were children swinging from trees, adults sipping beer outside pubs, dogs and babies playing in babbling streams, laughing families licking ice cream cones. It was enough to make us want to wend home so instead of heading back along the motorway we wen the scenic route through Fordingbridge, Salisbury and Stockbridge weaving our way through the New Forest ponies also enjoying the day. 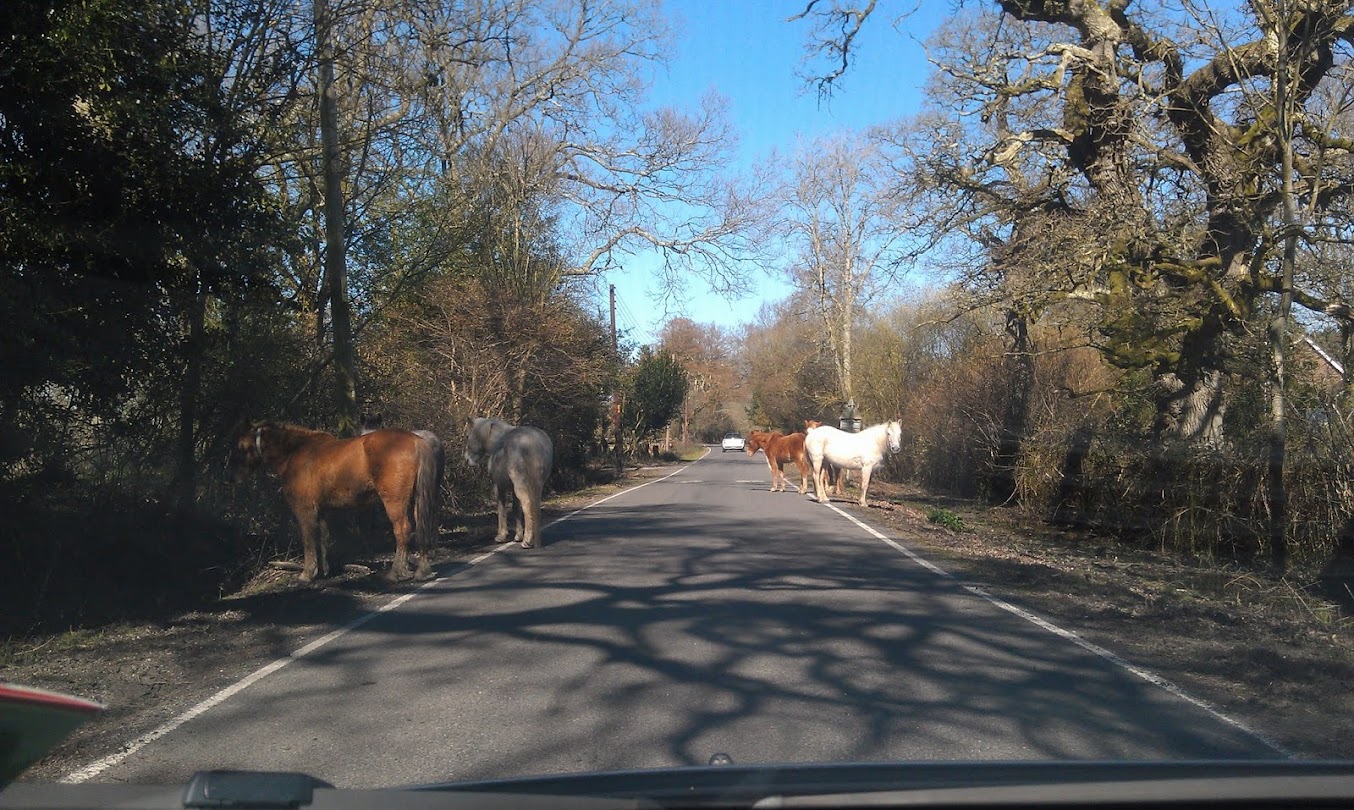 Despite the sunny spring day the Avon valley and Test valley were still scarred from the devastating winter floods with damage and standing water still much in evidence.

All in all a fantastic day out and a small, fun, friendly and good value race.

This is a personal website by Alison Pope.  The views on this website are my own, except where quoted from cited sources, and do not necessarily reflect the views of my employer, connections or loved ones.